A proposal to reduce the amount of fluoride in Milwaukee's drinking water will be considered by a city council committee on Tuesday, but a last-minute amendment backed by several aldermen also directs the Milwaukee Water Works and the Health Department to tell citizens of the potential risk fluoridated water poses to babies under six months of age.

Milwaukee's fluoride level is 1.1 milligrams of fluoride per liter.

Dr. Paul Connett Appears on Breaking Down The News - Milwaukee

Posted by End Fluoride Milwaukee at 3:19 PM No comments:

Water Fluoridation opponents and proponents met in Milwaukee today, to debate Water Fluoridation in the city. The Common Council Steering and Rules Committee had the ability to eliminate water fluoridation if it chose to. After 8 hours of testimony, the committee voted to hold the legislation until the next convening of that committee.

Experts like FAN Director Dr. Paul Connett, Dr. Bill Osmundson, and Dr. Yolanda Whyte presented in favor of eliminating Water fluoridation in the city. They did a fine job answering all of the questions the council presented.

Many of the Aldermen said they needed more time to sort through the information. Alderman Bohl and Alderman Bauman would've voted today to eliminate Water Fluoridation. Ald. Davis, Ald. Zielinski, and Ald. Hines seemed to be on the fence. Ald. Witkowski was not ready to make a decision, Ald. Murphy seemed to be in favor of continuing Fluoridation, and Ald. Hamilton had to leave early, but did seem to be in favor of elimination. Many of the Aldermen seemed genuinely interested in pursuing this further, so we need your help to maintain their interest.

We would like to thank Alderman Bohl for his efforts so far, and his continued push on this issue. he was overly prepared.

It is on us now to make this an issue! Please contact every Alderperson, especially the ones on the Steering and Rules Committee. CONTACT - Call them, email them, schedule appointments. We need our voices to be heard. NUMEROUS dental agencies showed up to fight against removing fluoride from the water. This isn't even a dental issue it's a toxicological issue. PLEASE inform your friends and get involved, view our Spread The Word page and print off fliers to spread: SPREAD THE WORD -

Thank You!!
Posted by End Fluoride Milwaukee at 9:21 PM No comments:

Vote on the Dangers of Fluoride, Then Come to City Hall

Please take a moment to vote on Milwaukee Journal Sentinel's website, there is a poll question asking people if Fluoride should be removed from Milwaukee Drinking Water. Please vote "YES." this poll is revealing that so many people have no idea, what Fluoride is or that it isn't good for you. Please spread the word to everyone you know! Look at Health Effects and 10 Facts find out why America is one of the last remaining countries to Fluoridate it's waters.

Also Please come to City Hall Today (Thursday May, 31st) at 1:30PM. There is a hearing on Water Fluoridation in front of the Common Council's Steering and Rules Committee in Room 301-B. We need our voices to be heard! Spread the Word!!
Posted by End Fluoride Milwaukee at 10:41 AM No comments:

Alderman Bohl held a news conference today, explaining his anti-Fluoridation stance. We hope to have more coverage of the conference later. This is the first acknowledgment by the city's Major Newspaper: The Milwaukee Journal Sentinel.
Posted by End Fluoride Milwaukee at 2:10 PM No comments:

New research shows that ingesting fluoride delivers health risks without benefit of less tooth decay which makes water fluoridation obsolete, unhealthy and a waste of money, and that is why I introduced legislation today calling for the end of Milwaukee’s water fluoridation program.

Fluoride chemicals have been added to Milwaukee’s water supply since 1953 when it was believed that ingested fluoride incorporated into children’s developing teeth would resist cavities. But science disproved that theory.

There is little convincing scientific evidence that swallowing fluoride actually reduces tooth decay. According to World Health Organization figures there is virtually no difference in tooth decay in 12-year-olds whether they have grown up in fluoridated or non-fluoridated countries. The Centers for Disease Control (CDC) says that fluoride hardens teeth from topical application and swallowing fluoride can lead to fluoride overdose symptoms such as dental fluorosis (yellowing, brown, white spotting or pitted teeth). Fluorosis rates increased from 22% of teens in 1986 to an alarming 41% in 2010, according to CDC statistics. If fluoride works topically why are we forcing people to swallow it, especially those who after doing their own research on the issue have emphatically stated that they do not wish to drink fluoridated water? If any one wants fluoride in Milwaukee they can buy fluoridated toothpaste and brush it onto their teeth and spit it out. Milwaukee shouldn’t be playing either doctor or dentist to our citizens. We are not qualified to do this and those who urge us to continue accept no legal responsibility for any harm it may be causing.

It’s accepted that fluoride can also damage bones, but no studies have researched the bone damage caused to children with fluoride-induced tooth damage. The condition of teeth and bones may be the least of our worries, however. There have now been 26 published studies that indicate an association between fairly modest exposure to fluoride and lowered IQ in children. Promoters tell us that the level we add to water is very small (1.1 milligram per liter or 1.1 ppm) but that is actually greater than 250 times the level of fluoride that occurs in mothers’ milk (0.004 ppm, National Research Council, 2006, p.40).

Further, the prestigious National Research Council’s (NRC) 2006 fluoride report revealed that fluoride, even in low doses, can harm the thyroid gland, kidney patients, babies and high water drinkers. They also report studies linking fluoride to osteosarcoma (bone cancer). A study conducted at Harvard in 2001 and published in 2006 showed that young boys exposed to fluoridated water in their 6th to 8th years had a 5-7 fold increased risk of succumbing to osteosarcoma by the age of 20. Despite promises that this study would be refuted, no published study has done so.

The National Kidney Foundation is among a growing list of organizations that has withdrawn its support of water fluoridation saying, “Individuals with CKD [Chronic Kidney Disease] should be notified of the potential risk of fluoride exposure.” The American Dental Association itself now admits fluoride is a concern to all kidney patients, not just those on dialysis.

Fluoride is not a nutrient or essential for healthy teeth. Fluoride is regulated as a drug in toothpaste by the FDA. Fluoride supplements have never been FDA safety tested and it classifies fluoride as an “unapproved drug.” The EPA regards the type of fluoride used to supplement water supplies as a contaminant. Even the CDC reports on its website saying, “It is not CDC’s task to determine what levels of fluoride in water are safe.” If it is not the CDC’s task, and the FDA refuses to do it, then whose task is it? Is the Milwaukee Common Council expected to do this?

While the less toxic calcium fluoride does appear in some waters naturally (.17 ppm in Lake Michigan water), Milwaukee adds hydrofluosilicic acid, a waste product of phosphate fertilizer manufacturing captured in its smokestacks, trucked as hazardous waste then injected unpurified into the water supply. These industrial grade fluoridation chemicals contain trace amounts of lead, arsenic, mercury, and other toxins. Arsenic is a known human carcinogen for which there is no safe level. By using these fluoridating chemicals we are knowingly increasing the cancer risk for our citizens. Why should we take these risks to reduce a negligible amount of tooth decay? Such a policy is reckless to say the least.

The ADA continues to actively promote the expansion of water fluoridation programs at the same time the CDC admits growing numbers of kids are fluoride-overdosed. National statistics show that tooth decay has grown in numbers and severity in toddlers more recently, and untreated tooth decay has grown in many age groups. The Pew Foundation reports “preventable dental conditions were the primary reason for 830,590 ER visits by Americans in 2009—a 16 percent increase from 2006.”

Americans are fluoride-overdosed and dentist-deficient. The lack of accessible, affordable dental care to many Milwaukee and Wisconsin residents has been widely reported. With no evidence, some claim that fluoridation helps the poor the most. Actually, the poor and malnourished are the most harmed by fluoride. They also are least in a position to afford expensive filtration systems required to remove fluoride from water, making this an environmental justice situation. According to civil rights leader and former mayor of Atlanta, Andrew Young, “I am most deeply concerned for poor families who have babies: if they cannot afford unfluoridated water for their babies’ milk formula, do their babies not count?”

We have served as guinea pigs in this ongoing and failed experiment for far too long. In my position as Alderman, it is my duty to promote the health, safety and welfare of all our residents. Adding fluoride chemicals into our public water supply runs counter to this and therefore needs to end.
Posted by End Fluoride Milwaukee at 2:18 PM No comments:

WE NEED YOU!! TO END FLUORIDATION

Breaking News on the Fluoride Front in Milwaukee, our efforts have been taken note of, and Alderman Jim Bohl has taken the initiative of exploring the dangers of Water Fluoridation in this city! He has developed two (.pdf) files containing numerous amounts of information and articles relating to the dangers Water Fluoridation. In the coming days this will be news!

The Common Council's Steering and Rules committee will be meeting Thursday May 31st, at 1:30 PM to discuss Water Fluoridation. We need you to show up and let your voice be heard!

WE NEED YOU NOW!! SPREAD THE MESSAGE!!

IF YOU RECEIVE MILWAUKEE WATER YOU ARE BEING EFFECTED BY FLUORIDE!
Posted by End Fluoride Milwaukee at 5:27 PM 1 comment:

As found by the International Bottled Water Association, these following brands in America contain Fluoride, it would be best to avoid these brands. 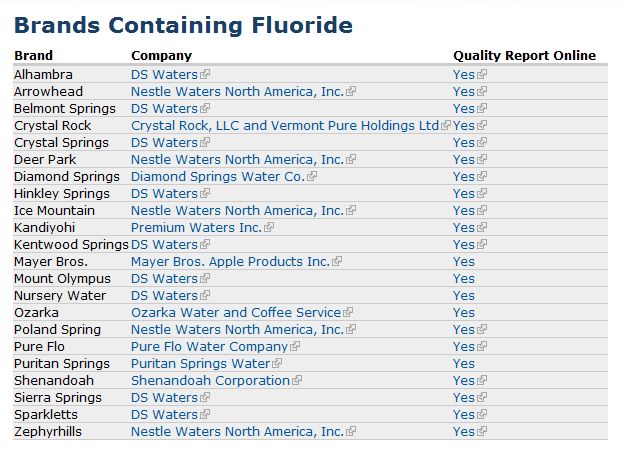 Notice some of the major brands found at your local stores.
Posted by End Fluoride Milwaukee at 3:20 PM 2 comments:

Op Ed on Study proving ineffectivness of Fluoridation on Cavities

Posted by End Fluoride Milwaukee at 1:32 PM No comments:

Water Fluoridation Stories From The Web
Get Niuzer Widget